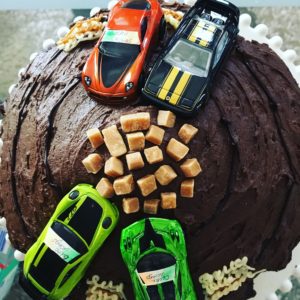 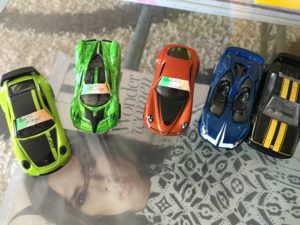 A while ago, I made this uber chocolate cake drift cake. It has melted mars bar/marshmallow topping sauce! It got me thinking about decorating cakes. Not something I give much thought too.

This was a special cake – for a friend of mine that had asked a few times for it, but I never really got around to making it.

My partner Colm is massively into drifting – a motorsport – so I decorated the cars to look like Colm’s motorsport team – The Celtic Kings Motorsport Team – as this friend is also part of the team. I bought the cars in Big W. I believe they came as a 5 pack of Hot Wheels cars. I used labels to create the car banners. I didn’t end up using all five cars as the cake looked cluttered with them all on it. I used toffee cubes to create an object for the cars to ‘drift’ around. I piped dark chocolate to give the illusion of tyre marks.

I also piped white chocolate mixed with caramel to give the illusion of smoke from the tyres.

For a first attempt at cake decorating I don’t think I did too badly!