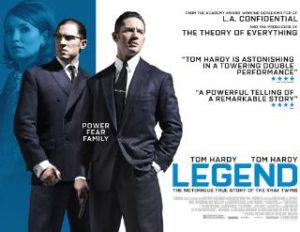 I recently rented LEGEND on Foxtel box office. I had been wanting to see it FOR EVER and not just because it stars the beautiful Tom Hardy. I had read so many stories about the infamous Kray twins in the papers and online before the movie came out, that their story genuinely peaked my interest.

The film serves as a platform for Hardy to showcase his excellent acting chops as he plays the two starring roles of twins, Ronnie and Reggie Kray. He portrays the animalistic and unpredictable gangsters who were known to have used intimidation and force to climb the criminal food chain in two very different ways – Ronnie is portrayed as certifiably insane and openly homosexual (which would have been quite a brave move at the time) while Reggie is more level headed, sees their criminal underworld as just business and really looks out for his brother. It is really clear from Hardy’s portrayal of both characters, that the twins were born to be gangsters as throughout the film Reggie promised his wife that he would ‘go straight’ but never did.

What I was really, really impressed with (apart from Tom Hardy’s serious acting abilities) was the special effects which allowed scenes which saw both twins be present in the same scene- I actually couldn’t tell if they used a stand in when acting the sequences as it appeared to be Hardy throughout and I was definitely watching out for a stand in – the more impressive scene being when Ronnie insults Reggie’s wife Frances and Reggie and Ronnie brawl in the nightclub.

I do wish the story line had more meat to it as it was never explained how the Kray twins rose to power within the criminal underworld, which I would have thought was an important piece of information especially as the film is titled ‘Legend’. I for one, would have liked to have seen their rise to become the legends that they have become. The film does delve slightly into the criminal underworld with the murders of two characters. The film also focused heavily on Reggie’s marriage to Frances O Shea as she narrates throughout and often fills in the blanks between scenes or voicing over scenes. Frances is portrayed as a bit of a push over.

Hardy carries the film and for that reason alone, the film is definitely one to watch, if only to see Hardy upstage himself as the iconic Kray twins.