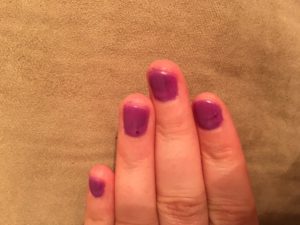 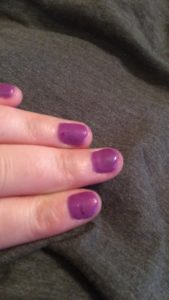 Gossip Nails is a new nail salon in the Maitland CBD. I usually get my nails done in Polished in Rutherford or in Pearl Nails in Greenhills. On this occasion, I thought I would try out the new salon to see what the experience was like and how they stacked up price-wise.

I took a friends 8 year old daughter, Grace, with me to get her nails done as a special treat over the school holidays.

We walked into Gossip Nails with no prior appointment. Both myself and Grace asked for a mani/pedi. I opted for shellac and Grace had normal polish. We were told to sit on massage chairs while our feet were soaking which was quite relaxing. However, the water went from one extreme to the other – hot to cold. There was no in between which was quite disappointing.

While choosing polish colours, I was informed that the salon didn’t have a couple of our choices which I found unusual as it is a nail salon but not the end of the world. I eventually settled on purple with flecks of glitter through it. I really was not impressed with the paint job. When I left the salon, I had polish on my surrounding finger as you can see in the image above.

I was charged $140 for the two of us which I found to be expensive considering I felt that I personally could have done a better job painting my own nails. I also found $55 for an 8 year old to have her nails painted a little excessive.

I also had to bring Grace back as she was told her nails were dry but as we left, when I checked her nails, they were still wet and smudged. To say I was not impressed is an understatement.

Above are pictures of my nails after my shellac mani in Gossip Nails.

The salon had 3 other customers during our time there. I hope they had a better experience than I did.

It’s also really important to remember that this was my experience in Gossip Nails. I hope anyone that decides to give them a go has a better experience and this isn’t standard practice for them as if it is I don’t foresee them lasting long.

I, for one, will never go back to Gossip Nails.