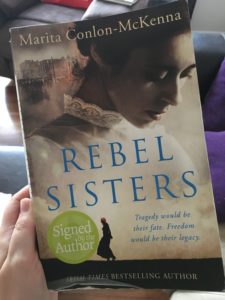 My Mum gifted me Marita Conlon- McKenna’s latest offering ‘Rebel Sisters’, which tells the story of the Gifford sisters and their involvement during the 1916 Easter Rising in Ireland.

I’m no stranger to Conlon-McKenna’s writing as I first fell in love with her story-telling as a child reading Under the Hawthorn Tree, a novel about the Irish famine. Interweaving true history and story-telling is something this author does really really well and Rebel Sisters was certainly no disappointment.

The story introduces the reader to the Gifford family. A family born from a strong Protestant mother and Catholic father, which would have been quite unusual at the time, living in Rathmines, Dublin. As the threat of WWI becomes apparent, tensions in Ireland are beginning to increase. The Gifford family strongly support the United Kingdom and the Queen. The book is based on fact which I really loved as it felt like I was learning as well as enjoying the book which doesn’t often happen. Nellie, Muriel and Grace, the sisters, are presented as well off, educated and strong minded. They don’t follow in their brothers footsteps by helping the British army. They are strong willed enough to stand up for a cause they believe in and risk everything they have including their lives.

I really enjoyed that the characters in the book were strong women, who played their part in history. The book gives a wonderful insight into the everyday people and their struggle at the time of massive political unrest in Ireland. It also offers a deeper insight into the historical leaders that we have learnt so much about in school on a personal level. The fight for Ireland’s freedom was never just the leading men but also the women and everyday people standing behind them.

This book tells the story of love, independence, trust, courage and bravery. A highly recommended read for those who would like a more complete picture of the Easter Rising and those involved in it.