First off, I want to state that microdermabrasion does not work for everybody.

When I was a teenager, I had bad acne, which I now put down to hormones, so I went on the pill which combated my issues for a long time. It wasn’t until I arrived in Australia and I wanted to renew my pill prescription that I ran into problems. My doctor had never heard of the pill which I had been previously prescribed, so tried me on a couple of different Australian pill types. To say I went a bit crazy is an understatement. I knew within a couple of weeks that the pills out here were not working for me so made the decision to come off the pill completely rather than risk my sanity. I was emotional all the time. We’re talking roller coaster ride.

When I came off the pill, I noticed that my acne started coming back slowly. I’ve written heaps of reviews of products (here, here and here) I’ve tried to combat my problem. There’s nothing worse than feeling like crap because your skin looks like crap.

I picked up a voucher on Groupon for Kitty and Co, a salon in Mayfield, NSW. I had a great experience there and went back for 6 sessions following my introductory session. I found that the biggest difference in my skin was from the first session to the second session. My skin was really red for the first 1-2 hours following the session (which only lasts 30 min). My skin was glowing following my first session, once it had calmed down. More than likely because it could finally breathe again because it really was so congested! 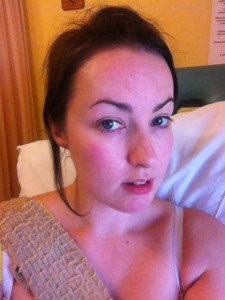 As you can see from the above picture, if you look closely, I had a lot of congestion around my chin which has now for the most part cleared up. I will continue to have microdermabrasion sessions every now and then to keep my skin looking fresh.

I didn’t only rely on the microderms, which I had every 2 weeks, but I also invested in the skincare regime my therapist recommended. I wouldn’t usually buy anything a therapist recommends until I’ve tried a sample but the difference my skin experienced really was something else. I used the AWE Cosmoceuticals range which wasn’t too expensive as I picked up the clearing travel collection kit which I think was $70 for the cleanser, skin polish and clearing serum. The kit lasted me approx 3 months which makes it quite affordable I think. 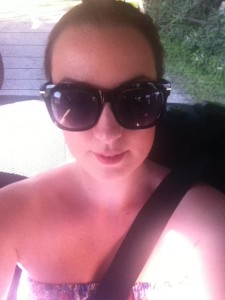