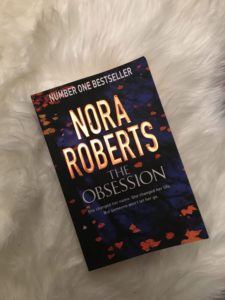 The Obsession is not like any other book I have read by Roberts. I literally read this book cover to cover on my flight to Bali (read about my trip here). I started reading Nora Roberts when I was about 20. My mum started reading her bride series – Vision in White – while we were abroad and I happened to pick it up. I have followed her novels ever since. Fluffy chick lit to dark twisted murder. Quite the page turner!

This book is dark, twisted and literally about obsession.

The novel starts with a young Naomi following her father into the woods. She discovers her father is a serial killer. One of the most prolific serial killers. As Naomi grows up, she changes her name to distance herself from her father and his heinous crimes, but her father’s past soon catches up with her and Naomi becomes the center of someone else’s obsession.

The book is divided into two parts – the past and 17 years later – both are told in present tense so you really feel like you are there with Naomi. Roberts has also included chapters from the perpetrators point of view which I enjoyed reading as the author didn’t give away much as to the identity of the person until right at the end.

I really enjoyed reading about the characters in this book. Roberts ties their stories together beautifully while also creating a lot of suspense. Throughout my reading of the book, I wasn’t sure who the good guys and the bad guys were. I particularly liked that Naomi had been through a whole heap of shit and that she still wasn’t just ‘over it’, rather she was dealing with it. I hate that in some books, shit happens and the after affects just magically disappear. I also love that the main character is a strong female role model.

All in all, in my opinion, this is a great read.