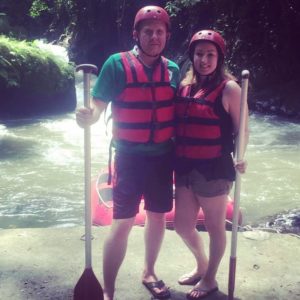 On my recent trip to Bali, I wanted to do something a little bit different and adventurous. Who doesn’t love adventure – right!?

We decided to go white water rafting on the Ayung river. I wasn’t quite sure what we had signed up too at first.

We had 9km of river bend to battle, not to mention 240 steps to get down to the waters edge – talk about gym workout! I didn’t expect to have quite as much fun as I did, but I absolutely loved rafting! I would highly recommend it to anyone, that is in the least bit interested in doing anything active while on holiday.

The course was challenging and there were quite a few times when I thought we might topple out of the boat but surprisingly when I got out of the boat for a swim in the still part of the river, it wasn’t deep at all. I could stand which was a relief. We stopped by one of the many waterfalls and at a spot that was deep enough for some of the boys to jump in, which was pretty cool.

About half way through the course, we also stopped for a drink. The local people have set up drinks stands along the waters edge which I thought was quite entrepreneurial!

Even though rafting was quite active, it was also really relaxing and enjoyable. The views were also unreal! It was like stepping back in time to the ancient island in King Kong or Jurassic Park – very cool and also breathtaking! We were also lucky enough to see monkeys in their natural habitat, jumping across the branches of the trees alongside the river which was pretty surreal.

If you take a trip to Bali, I would highly recommend rafting as an experience! 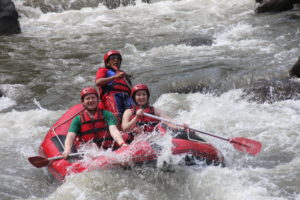 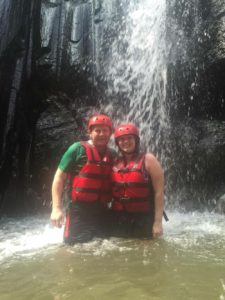