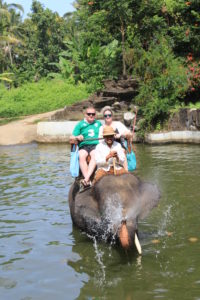 I decided to check out the Elephant camp while I was in Bali. I was really cautious as I didn’t want to be involved in any type of animal abuse. I was convinced by our tour guide from BaliKu that the Elephant camp was the best place to go. They don’t allow big buses at the camp so it’s not ‘big business’.

The elephants and other animals are all rescued animals and treated well, as far as I could see. If the elephants are tired then they are allowed to rest and another elephant comes out. I also saw the elephant ‘pen’ as one of the elephants had only that morning had a baby. One of the tour guides advised us to walk up to the chocolate shop as we could see the baby and its mum through the fencing there. If there had been anything sinister going on, I don’t think they would have wanted me to see this area.

Part of the short ride on the elephant includes the elephant walking through water so they can cool down. The elephant was also fed through out our short walk which eased my concerns and went for a rest straight after. They have 13 elephants at the camp. Only a handful do rides at any one time. 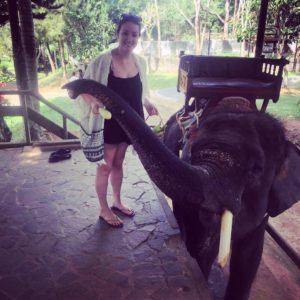 I also spent time patting the elephant after the ride and bought a bucket of treats for him. I was allowed to feed him so I know he got the treats. There was very few people at the camp which I was pretty impressed with as I was worried that the elephants were not being treated properly before I visited. I struggled with making the decision to even do this. I have visited Kenya and seen elephants in their natural habitat in the Tsavo National Park, so to see elephants like this is really sad. In saying that, I understand that these elephants have been rescued from doing rides day in, day out, constantly. The elephant camp doesn’t solely offer elephant rides but also has a chocolate factory, white water rafting and a small restaurant so you can just chill and watch the elephants if you want to.