I haven’t had my nails done many times since being in Australia but when living in Ireland got them done quite a lot!

I don’t know a lot of people in Newcastle that get acrylic or gel nails so summoning up the courage to just walk into a nail salon was hard. Who wants nail infections and the like?!

The first time I got my nails done in Pearl in Greenhills, which was a total disaster. I went with one of the girls, Carly, after a girly day. The girl doing my nails literally had my nail bleeding down my finger and continued to do my nails like nothing was wrong which I found really unprofessional. I also like a bit of a chat when I’m having a beauty treatment and found myslef moved around like cattle there.

I haven’t been back. But I got over that.

Before heading back to Ireland for a wedding in October (find out what I wore here), I tried Glamour Nails and Beauty in Marketown. I didn’t book an appointment. I had to wait for 30 minutes before it was even my turn. I was pretty impressed apart from the lump of acrylic which was left under my right hand, middle finger. It wasn’t really big but it did become super annoying as I literally find myself picking at it all the time.

It has now been 4 weeks since my appointment. I haven’t had any breaks which must be a new record for me. I also thought I would have much more nail growth in 4 weeks. I’ve been painting my nails over my regrowth and the acrylic part and the regrowth isn’t noticeable at all.

I paid $55 for acrylic nails with shellac which is a lot cheaper than Pearl Nails in Greenhills which cost me $75. 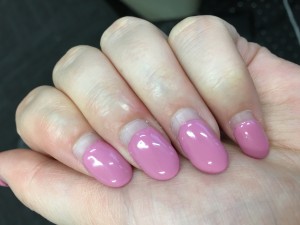 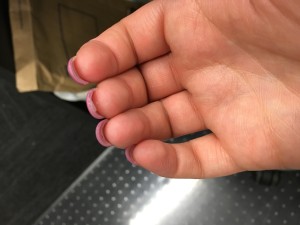