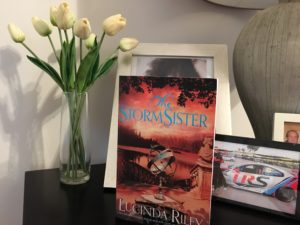 The Storm Sister by Lucinda Riley arrived in my post box in November, along with a press release from Pan Macmillan. At first glance, I wondered when I was going to get time to read it over Christmas as it is 683 pages long, but I knew once I had glanced at the press release that it was definitely a book I wanted to read.

The novel tells the story of Ally D’Aplièse, who is about to compete in one of the world’s most perilous yacht races, when she hears the news of her adoptive father’s sudden, mysterious death. She discovers that her father (the very wealthy, Pa Salt) has left each of his six adopted daughters (each named after The Seven Sisters) a tantalizing clue to their true heritage.

In Norway, Ally begins to discover her roots – and how her story is inextricably bound to that of a young unknown singer, Anna Landvik, who lived there over a hundred years before, and sang in the first performance of Grieg’s iconic music set to Ibsen’s play ‘Peer Gynt’. As Ally learns more about Anna, she also begins to question who her father, Pa Salt, really was. And wonders why is the seventh sister missing?

As the book was sent to me as a PR copy, I hadn’t read the first book in the series – The Seven Sisters- so I wasn’t sure if I needed to read The Seven Sisters first. I powered through The Storm Sister which stands alone as a novel and tells a beautiful story. Although I have been inspired to purchase the first novel in the series.

I really enjoyed this book. The author tells the story so vividly and beautifully intertwines the story of Anna Lanvik and Ally D’Aplièse, that I felt like I was on the adventure with them. The story jumps between people who bit by bit tell their own version of events which can sometimes be a little messy for the reader trying to remember who everyone is and what has happened in each time frame but Riley writes a beautiful story. I mentioned that I previously wondered when I was going to get time to read this, that wasn’t an issue at all, I couldn’t put the book down once I had started it and finished it within a few days.

I loved the book so much, it has inspired me to research my own family tree. I will patiently await the release of the next book in the series.

If you are looking for a book to read, I would definitely recommend Lucinda Riley’s The Storm Sister.