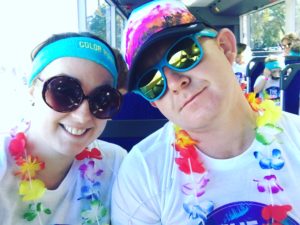 I have been on a self care journey this year. When I saw The Color Run was coming to Lake Macquarie, I knew I wanted to run it.

Groupon advertised tickets for a LOT cheaper than the tickets on the event’s website. If you plan to do The Color Run, I would definitely check out a few of the discount websites like Groupon or Sccopon or Cudo. It will save you a small bundle.

The Color Run is such a happy event. People were high-fiving while running past each other.

Throughout the 5KM, there were stations where people threw color bombs over the runners. I also saw water stations and a LOT of photographers throughout the run to capture all the fun! 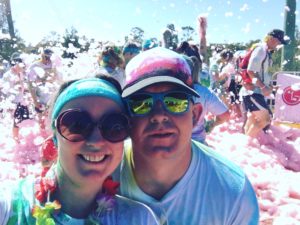 My favourite part of the run was the foam pit. I wasn’t quite a fan of the slime station. If I had to do the run over though, I would plan to do it a lot earlier.

There were a LOT of prams as children were welcome to take part. It was quite difficult to actually run the event.

The event was really well organised. We parked over at the council buildings and then were bused into the event which worked really well. When we had finished the run, we were handed a medal, blown with a wind blower to get rid of extra chalk and handed clear poncho so that leaking chalk color onto car seats or on public transport wouldn’t be an issue.

At the end of the run, there was a band playing and prizes were given to those in the best costumes. There was a real sense of community which I loved. Personally, I would love to do this run again!