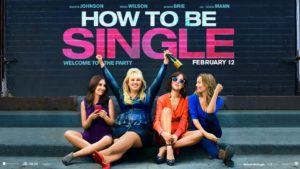 MOVIE REVIEW: HOW TO BE SINGLE

How to be Single is hilarious. There I said it.

Not because all of the characters are laugh out loud funny. No – just one.

The plot line is not so original but I can forgive that when the dialogue has me holding my stomach in fits of giggles. The film stars Dakota Johnson, Rebel Wilson, Alison Brie and Leslie Mann. At times the story line reminded me quite a lot of Sex in the City. The movie itself is fairly run of the mill – think awkward feminist rom-com but is very funny – largely due to Wilson’s character’s one liners.

I enjoyed the relationships between 3 of the characters but found Alison Brie’s character a little bit lost and didn’t quite fit with the movie. It was almost like they were going for a Valentines Day/New Years feel where the storylines intertwine but it didn’t really work for me. The only tie between all the girls and their stories was the bar. The movie is VERY predictable in that girl breaks up with boyfriend and moves to the city and finds herself kind of way.

If the movie hadn’t had Rebel Wilson in it, would I have enjoyed it as much? Not likely. Her one liners more than made up for the crappy story line though.