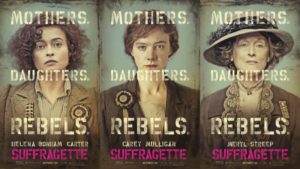 I had tickets to see Suffagrette on Dec 1st.

I wasn’t sure what to expect from the movie at all. I had heard of the Suffragette movement when in school and in University but both of those experiences were a long time ago!

The movie bio states that:

SUFFRAGETTE is a thrilling drama that tracks the story of the foot soldiers of the early feminist movement, women who were forced underground to pursue a dangerous game of cat and mouse with an increasingly brutal State. These women were not primarily from the genteel educated classes, they were working women who had seen peaceful protest achieve nothing. Radicalised and turning to violence as the only route to change, they were willing to lose everything in their fight for equality – their jobs, their homes, their children and their lives. Maud (Carey Mulligan) was one such foot soldier. The story of her fight for dignity is as gripping and visceral as any thriller, it is also heart-breaking and inspirational.

I brought Colm along and we had date night. I’m a massive believer that all people are equal – Man, woman, child, race – it doesn’t matter. It’s who you are as a human being that really matters. I found it difficult to watch some scenes because of my belief. It was especially difficult to watch the way women were treated before the vote, but, in saying that as a woman, I absolutely LOVED this movie. It is so empowering to see women fight for the rights we have today. Without those women, I wouldn’t be typing this today. I also wouldn’t have equal rights.

What I did find astonishing was that so many countries only voted in the equal vote for women in the last 50 years and that Saudi Arabian women have only been ‘promised’ the vote.

In my opinion, the casting for the movie was superb. Carey Mulligan gave an amazing performance as a woman who was radicalized and paid the price. I also loved the period dress. It really was a well executed period drama. What I didn’t like was that Meryl Streep (who I’m a massive fan of) was billed as having a big part in the media but had a very minor role in the movie.

As I said, overall, I loved the movie. It really is a worthwhile reminder of how far women have come and the price which was paid by many women to achieve what we have today. I found myself walking away, wondering, how much more can I do?