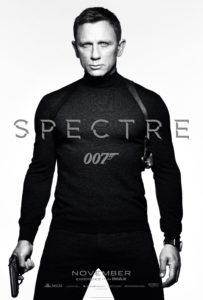 I went to see the latest James Bond movie ‘Spectre’ when I was home in Ireland. It’s along standing tradition that we go see any of the James Bond movies as a family. My dad is a massive fan so we’ve grown up watching Bond take on all of his nemesis’.

I had high hopes for ‘Spectre’ as I had really liked Skyfall but I felt like it didn’t really live up to the hype. With movies like ‘Octopussy’ and ‘Goldfinger’, the plot was exciting and unfolded quickly. That probably has a lot to do with the fact that ‘Spectre’ is a full 40 minutes longer than ‘Goldfinger’ for example or, 20 minutes longer than ‘Octopussy’. It is however roughly the same length as ‘Skyfall’ which I enjoyed a lot more, most likely due to me enjoying the plot line.

The movie is, in my opinion, perfectly shot which is a credit to the director – Mendes, who also directed ‘Skyfall’. I loved the casting but felt the plot lacked excitement which is what a bond movie is all about. There was nothing new about it as I felt a lot of the movie had been done before within the franchise.  Topping ‘Skyfall’ was never going to happen but I didn’t think ‘Spectre’ would play it so safe. The villain didn’t really appeal to me at all as he is quite old fashioned. The script overall felt like patched rewrites rather than the smooth cohesive Bond movies I have come to know and love.

After 24 movies, I would have thought Bond could do so much more. Bond, for me, has always been about the gadgets, the excitement and the sex appeal between Bond and whichever Bond girl. This movie just lacked everything that I want out of a bond movie.

We Build Exclusively for the Genesis Framework